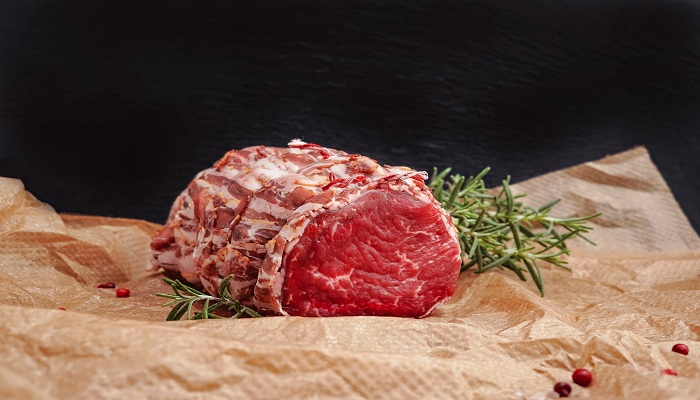 Food technology is a division of food science engaged in the production, preservation, quality control, and research and development of food products. It refers to businesses and initiatives that invest heavily and employ the Internet of Things, big data, and artificial intelligence to convert the agri-food industry into a more contemporary, sustainable, and economic sector at all phases, from production to distribution and consumption. Recently, people are becoming increasingly conscious of the environmental benefits of moving from animal meat to plant-based meat and cultured meat, in addition to the health benefits. As a result, startups that make lab-grown meat and meat substitutes are gaining popularity and receiving money in international markets, echoing a boom of backing for food technology businesses in the US. About 10.5K+ companies in the Food Tech industry manufacture next-generation meals to replace traditional eating habits. Since 2015, cultured meat startups have raised over $125 million, with investment increasing by 85% between 2017 and 2018. Bill Gates, Richard Branson, and Google co-founder Sergey Brin are among the elite supporters who helped fund the first synthetic beef burger in 2013.
In this article, we’ve included some of the most successful food tech businesses focusing on plant-based meats.

Impossible Foods focuses on developing plant-based meat, dairy, and fish alternatives. The firm conducts genetic research on animal goods before selecting proteins and minerals from plants to mimic the taste and nutrition of meat products. After years of research and development, the company’s hallmark product, the Impossible Burger, was released in July 2016.

Ethan Brown created Beyond Meat, a plant-based meat substitute company located in Los Angeles, in 2009. In the beef, pork, and poultry sectors, the firm provides plant-based alternatives. Burger patties, ground beef, and sausage are among its goods, which may be found in grocery shops and restaurants. In addition, the company has just reintroduced its chicken product line, which is now accessible in restaurants. Beyond Meat’s stock price surged by 500% in the first three months after it went public, thanks to investors and consumers who were impressed by its realistic meat-like goods.

Gardein makes and sells dairy-free and meat-free goods and recipes, such as barbecue wings and vegetarian meatloaf. Black bean sliders with buns are one of the brand’s easy frozen prepared appetizers.

Plant-based meats are becoming more popular. Are they, however, long-term?

Plant-based meat products assist in reducing meat consumption, lowering blood cholesterol, maintaining calories, and boosting protein consumption, all of which reduce the risk of cardiovascular disease. Plant-based diets are more sustainable than animal-based diets because they consume less natural resources and are less harmful to the environment. Plant-based meats have the advantage of eliminating the animal, allowing for more efficient use of land and resources. Plant-based meat produces 30–90% fewer greenhouse gasses per kilogram of meat than traditional beef (kg-CO2-eq/kg-meat). According to a 2018 study conducted by experts at the University of Michigan, a quarter-pound Beyond Burger emits 90% less greenhouse gas than a cattle burger. Plant-based diets raise the risk of protein, vitamin, and mineral deficiency. However, these dangers may be easily avoided by eating the correct vegetarian meals and, if required, taking supplements. Plant-based meat still holds less than 1% of the US meat market and faces challenges in replicating meat products despite its rapid expansion. Plant-based meat companies have had difficulty scaling up, and price parity with meat is still a long way off. 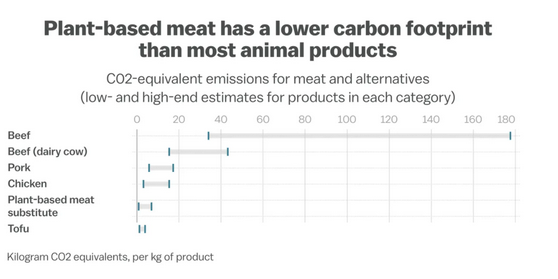 Vegan lifestyle and diet acceptance among health-conscious customers will likely boost market growth, particularly in developed economies. As a result, the plant-based food industry has been booming in recent years, with new products being released monthly. In 2021, the worldwide plant-based meat business was worth US$ 8.5 billion. The market is estimated to reach US$ 34 billion by 2027, according to IMARC Group, with a CAGR of 25.8% from 2022 to 2027. Investors have spent $2 billion into the industry in the previous two years. More investment will be made in the coming year. By 2025, according to Bank of America, the global food solutions industry will be worth $300 billion to investors. Plant-based meat is an essential element of the American diet, and it inspires people to pursue a plant-based, animal-free lifestyle.
The IDTechEx research includes a ten-year market estimate for the future of the plant-based meat business, estimating that the worldwide plant-based meat market would be valued at over $29 billion by 2031. 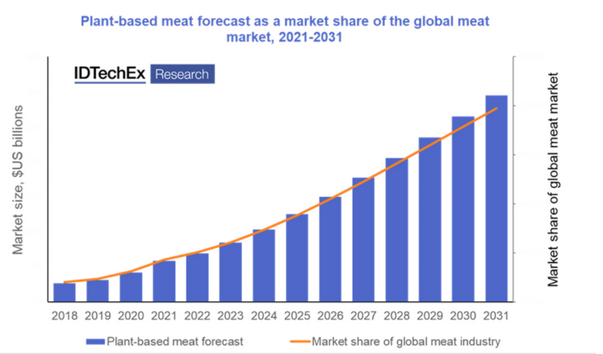 In conclusion, as compared to their animal counterparts, plant-based meats provide a number of advantages. The gradual but steady shift in popular opinion toward both meat and plant-based meat is a positive development. Switching to plant-based meat that is produced in a healthy and paraben environment can help reduce animal-farming-related problems like disease outbreaks. With the flavor, texture, and appeal of meat ingrained in the non-vegetarian population, plant-based meat producers will need to work hard to replicate that experience in their goods in order to gain a foothold in the market.

Related Links:
Biggest Tech IPOs of 2021
What’s Ahead for the Auto Industry in 2022? 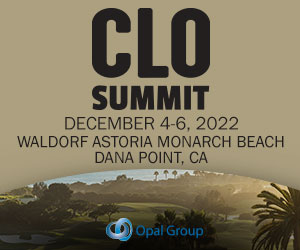